We were left free to operate in an autonomous way. We therefore started setting some general rules that we believe these rules allows for a fair procedure and we would like to share to the whole community.

Since the focus is on the most influential papers we believe that a good help can come from bibliometrical information. Therefore we decided to use

Given that this was the first edition of this award was given we also had a look to 1991, and 2001 papers.

The first filtering was made with google scholar (publish or perish software). MIT press/LNCS (old) proceedings do not emerge well in official databases as ISI or Scopus. For 20 years-old papers we soon realized that there are some problems (e.g. 0 citations for the ICLP paper, 85 citation for a research report with the very same name, 100 of citations for a journal version of the paper with the very same name, etc.) We kept track of that using two columns. No problems of this kind emerged for 10 years old papers.

In order to minimize errors looking for the paper with the precise name (symbols in titles are not always handled correctly by these databases) we looked for a super-set in the following way. Look for the papers list (using DBLP or your own copy of the printed proceedings). Then choose an author of the paper with a surname without accents, in case break a tie with the author with a less common surname, then look for all his papers in the interval of publication between, say, 1990 and 1996, then analyze by hand the report looking for the paper or other papers very close to it.

Basically we selected 20 years papers with at least (roughly) 150 citations (including, when applies, the citations of the RR with the same name and sometime of the close journal publication with the same content). We also used ISI and SCOPUS in this short list to have another hint. For 10 years papers, bibliometric data is more precise but  references were lower and therefore we considered those reaching roughly 60.

The algorithm can be easily reproduced (but the data changes daily). 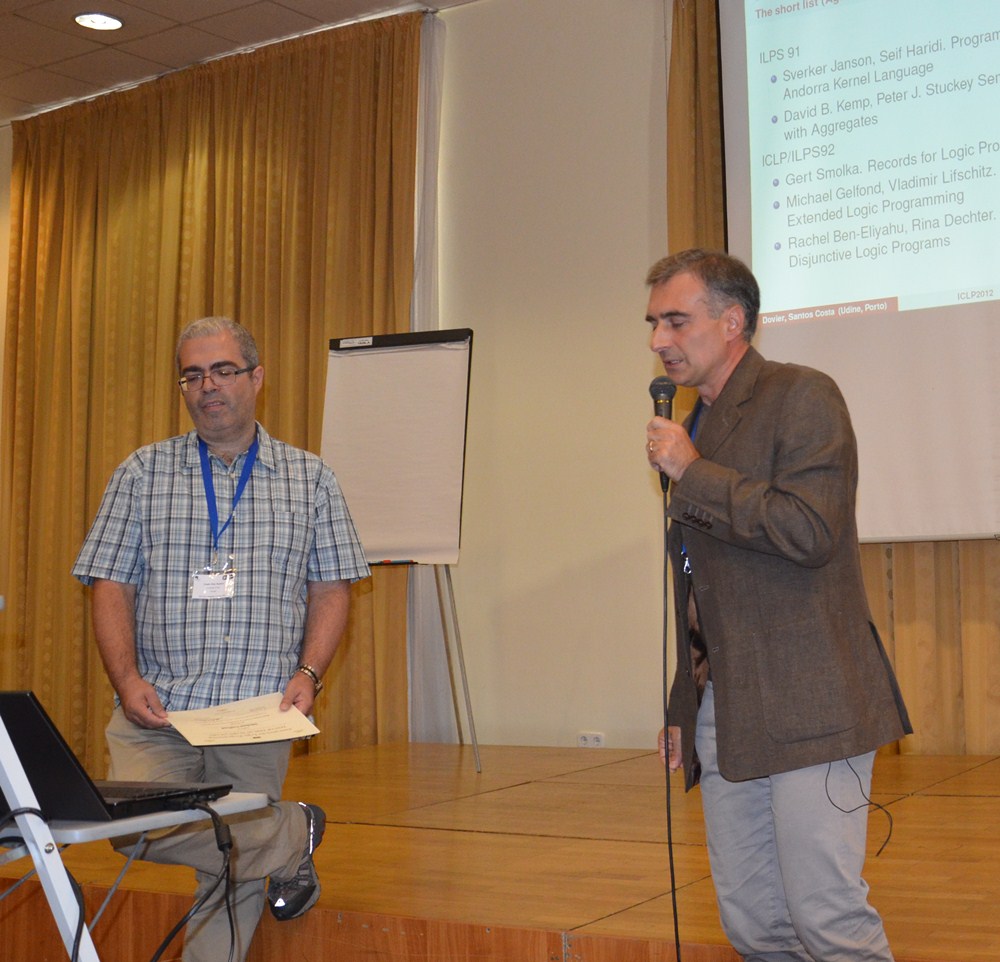 Vitor and Agostino nervous during the award ceremony

We report here the short list of the 20 years (we have removed our personal papers, some of them were present, but in any case they were not at the level of the winner).

The winner was out of any doubt Gelfond-Lifschitz paper (bibliometric was so clear that any other consideration is useless). Vladimir Lifschitz was there receiving the awards and giving us a great talk on that paper and its evolutions. 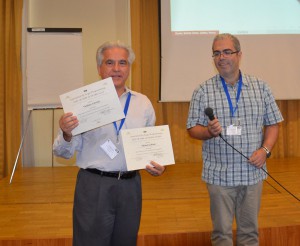 For the 10 years paper the situation was more balanced. The short list is the following.

The paper by Alessandra Russo et al. was also the best student paper in ICLP 2001. PC members chose very well. However, we decided that Bry-Schaffert paper has most influence in the broader set of computer science community. They built a bridge between logic programming and semantic web that is continuing in these days with joint summer schools and meetings. 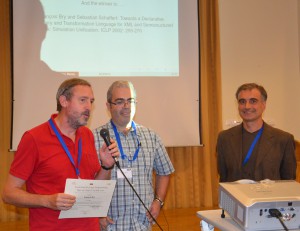 We would like, anyway, to congratulate other authors as well. They all did great work.

The funny thing is that all this work was kept secret. We did it very in advance in order to invite the winners. The ALP president (Gopal) discovered the winners only few days before the meeting when he had to print the awards. We don’t know if secrecy is the best choice but we decided this way.

A final point: the test-of-time awards end up being two invited talks. We didn’t worry about having good speakers, but we got lucky.