When I was asked by Roland Yap, the general co-chair of ICLP’15, to run a programming contest, I accepted his invitation without hesitation; I had participated in so many competitions but never organized one myself. Since ASP had become a dominant faction of ICLP, and ICLP’15 would be collocated with CP’15, I thought that it would be interesting to have a contest for all of the Prolog, ASP, and CP communities. Fortunately, with Antonius Weinzierl and Peter Stuckey joining the organization, it became possible to design such a contest.
In order to design a contest for all of the LP/CP systems, we made a couple of changes to the format of past Prolog programming contests. First, all of the problems used in the contest were combinatorial in nature, so that they would be solvable by ASP and MiniZinc systems; this entailed that we had to abandon the tradition of using one drawing problem. Second, instances are now given as input files, rather than Prolog queries, and a run is started by a command line that will take the program name and the instance file as arguments. For LP systems, an input file contains Prolog-format facts, and for MiniZinc, an input file contains definitions of constants. The contest looks more like the ASP model & solve competition than the traditional Prolog contest.
The LP/CP contest maintains the “for-fun” nature of past Prolog contests. In fact, the LP/CP contest was set up to be more fun: the problems were made available online; each team was allowed to use two computers, rather than one as in the past competitions; submission of solutions was made possible via EasyChair, rather than USB stick as in the past; free Belgian chocolates were distributed before and after the contest.
There were complaints about the hardness of the problems used in past ASP and MiniZinc model & solve competitions. We made efforts to create five problems that we would be able to solve in three, if not two hours. All of the five problems are optimization problems, so we didn’t need to write solution checkers for them. The Games problem was inspired by a Google Code Jam problem; the Fixing N-queens problem was suggested by Sergii Dymchenko; the Logistics problem was adapted from the Transport domain used in IPC’14; the Packing problem was inspired by a puzzle in a book; the Pizza problem was adapted from a problem by Bart Demoen.
A total number of twelve teams participated, including three online teams. The following systems were used: ASP, IDP, MiniZinc, and Prolog. The first-place went to the IDP team, consisting of Jo Devriendt, Ingmar Dasseville, and Matthias van der Hallen, and the second-place went to, Mario Alviano, an one-man ASP team. Both teams each solved four problems, and the IDP team won by submission time. Congratulations to the two teams for their fantastic performance! 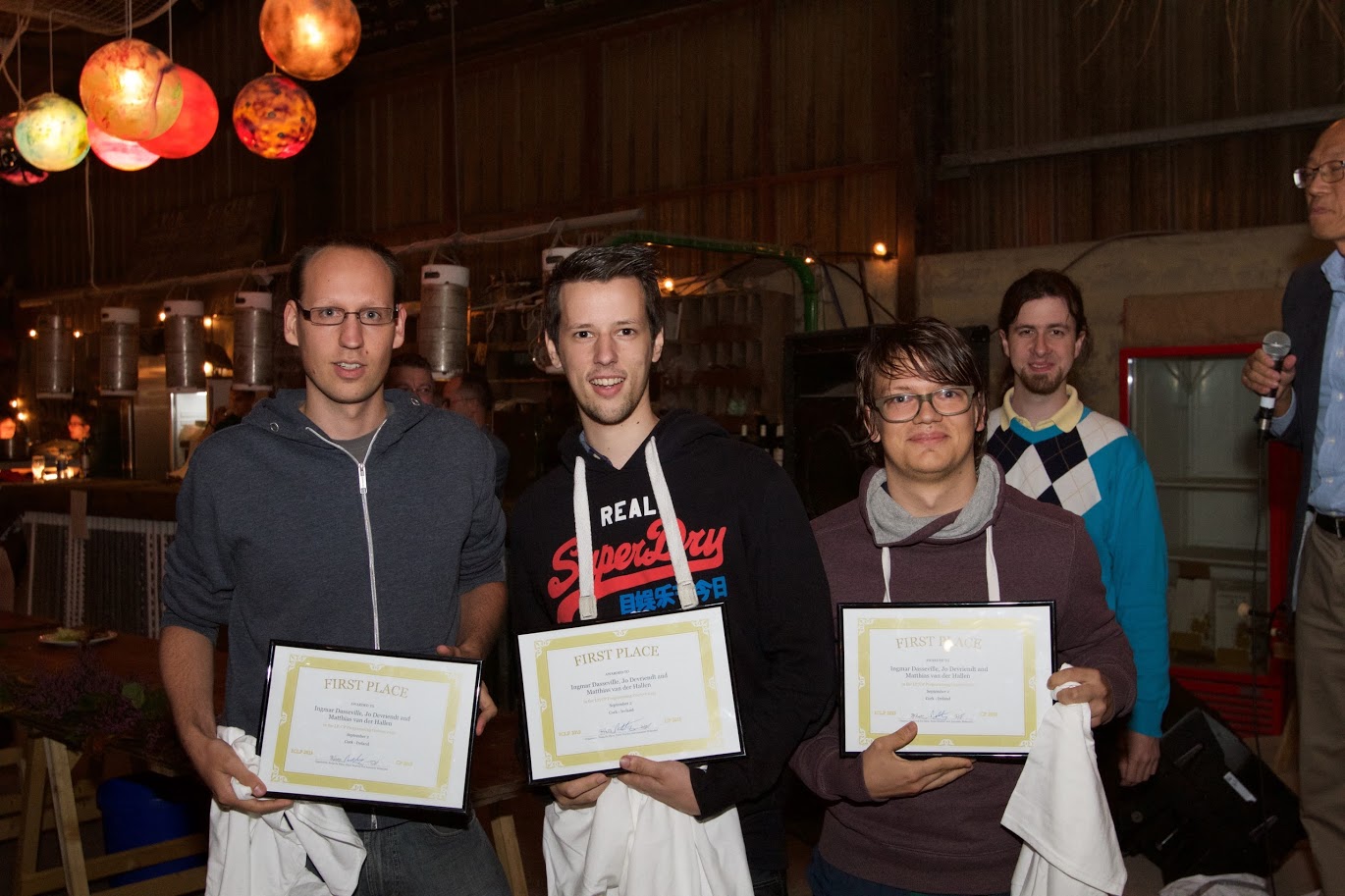 The winners (pic by H. Simonis)

The problems and rules of the LP/CP contest can be found at:
http://picat-lang.org/lp_cp_pc/
I’d like to thank Antonius Weinzierl and Peter Stuckey for their help with the organization, the general chairs (Roland Yap, Ken Brown, and Barry O’Sullivan) and the program chairs (Thomas Eiter, Francesca Toni, and Gilles Pesant) for their support (special thanks to Roland for his involvement in the organization from the beginning to the end, and Barry for the Belgian chocolates), and, last but not the least, the teams for their participation.
Neng-Fa Zhou
September, 2015