Everyone knows how the Prolog Programming Contest works: you lock teams of Prolog programmers in a room for 2 hours with 5 challenges.  Each team has 3 members and one laptop. The team that solves most challenges in the least amount of time is the winner. 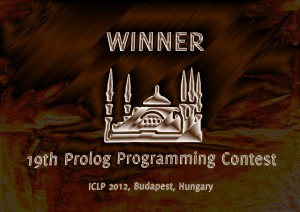 Unfortunately, this year there is some very sad news. Many of the senior people in this community have retired from programming. Or so they told me. Some even admitted they were just plain lazy. Of course, I already knew that from their students, who claimed that their supervisors

The good news is that we only had elite programmers in the contest this year: 6 teams of, in total, 18 super-motivated Prolog programmers.

By participating they are all winners.

A few words of thanks are in order for the people who have made this edition of the programming contest possible. I would like to thank the program chairs, Vitor and Agostino, for making the contest part of the ICLP program. Special thanks to Peter Szeredi who has provided us with a spacious room, with ample power sockets and air conditioning. Thank you all.

Now, let’s move on to the questions. As usual, the five contest questions were together right before the conference. This year they were soaked in a Hungarian sauce,
featuring a famous Hungarian puzzle: Rubik’s cube. Fortunately, all the problems turned out to be doable. All 5 problems were solved once or twice, but unfortunately one team did not manage to solve any problem. But that’s no shame. The contest is in the first place about having fun.

The teams started slowly working on the problems. And clearly they have learned from past years, because everyone took at least 15 minutes of thinking before starting to program. After half an hour the submission slowly started coming. They received 28 reviews: 10 were accepted as full solutions and 18 merely as technical communications. Most teams got feedback on their results, but not on their submissions in the last minute, so we may still be in for some surprises…

I am happy to say that although old, SWI-Prolog is this year’s Prolog system of choice. Congratulations to the winning team: Alessandro dal Palù,  Enrico Pontelli and Agostino Dovier! 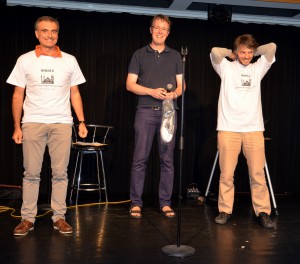 I hope you’ve all enjoyed — I know that I did.